A hit on the head and where it led – guest review

– a book review by Nick

“A hit on the head” is a non-fiction book about a six year old who rode his bike into a car and got a hit on his head and how he got over this struggle.

The boy was knocked out and was rushed in an ambulance to the emergency room at the hospital. A torch was shone in his eyes “as bright as the moon”. He woke up and said “my head hurts”. There were some scans and tests and an operation to clear blood from his head. His mum, dad and teddy bear were at the hospital and in a few days he felt much better.

At school it was hard, he couldn’t do work easily and words got jumbled. His mum said his brain just needed a rest. Kids at school called him “brain damaged” and other names, it was a struggle.

Four years later his writing was great and this encourages other kids with brain damage or a hit on the head to keep trying and be strong.

On the back of the book it says “wear your hat man”. I always wear my helmet.

From my perspective as a young rider, falling off your bike is bad if it’s on concrete but some falls can easily be avoided by slowing down and thinking ahead, especially at corners and busy roads. When I fell off my bike and went to hospital it hurt but it’s good to know your family is there with you.

At school respect everyone and their different learning, including if they have been “hit on the head”. It doesn’t matter whether you’re bullied or not respect everyone.

A hit on the head and where it led (with link to YouTube video) is available for loan from the AWCH library.

Other AWCH resources for families of children with a Traumatic Brain Injury include :

Out of the shadows: understanding the experience of siblings following their brother or sister’s Acquired Brain Injury [DVD]

Looking ahead: Returning to school after an acquired brain injury [DVD]

Step by step: a guide for families of children and adolescents with a brain injury (E-resource)

Out there! recreational activities and resources for young people with acquired brain injury. A guide for parents

Head injury, the facts: a guide for families and care-givers by Dorothy Gronwall, Philip Wrightson and Peter Waddell,

Caring for children with special healthcare needs and their families a handbook for healthcare professionals Edited by Linda L. Eddy, Oxford Wiley- Blackwell, 2013. 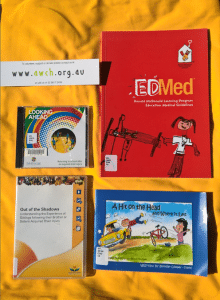