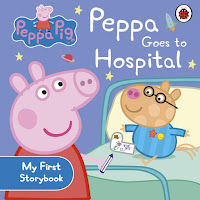 Children were excited when Peppa Pig Goes to Hospital was the story of the day at one Sydney play group. There were about 15 children, mainly two year olds and pre-schoolers, who sat on the story time mat. During playtime they couldn’t wait to put bandages on their dolls or teddies and one boy carefully bandaged his dinosaur’s tail. Craft was a lot of fun with Humpty Dumpty, both before and after the accident, some children preferred the ambulance craft. It was a bustling morning but there was time for children to select a book from our display and have a quiet read. A few did this.  There were over twenty books to browse or borrow and several parents commented about the range of books available.

Before the story, children were told, ‘When we go to see a doctor or nurse we can take a special toy or book and we will have our mum or dad or person who cares with us’. Peppa pig’s hospital room had a bright rainbow and after the story I commented, ‘We can always play and draw pictures when visiting the doctors or in hospital’.

The playgroup was well equipped with hospital play kits including stethoscopes, bandages and toy thermometers. If any toy was short of a bandage, a box of bandaids was within reach. One little girl showed me green dots all over her baby’s head. She and her mother had carefully placed bandaids over the middle of the baby’s head covering the ‘dots’. This was clearly a topic the kids related to. 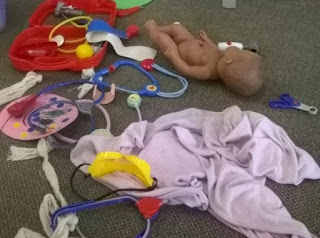 I was the first of several visitors for term three with the theme, ‘people who care for us’. The playgroup leader introduced the topic talking about doctors and nurses and the children sang several action songs about being sick, including ‘humpty dumpty’.

When the doll, teddy and dinosaur play began a brochure was handed out, ‘Hospital preparation for pre-schoolers – time well spent’. In amongst the fun I was hoping to convey to the children that when we are sick or hurt, it is not because of something we have done. Also if we are sick, doctors and nurses are there to help us get better and Mums, dads or the person caring for us will be there to give us a hug. 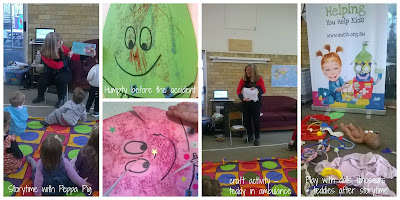 Whilst the children played, parents were reminded that fear of the unknown is an issue for young children and that pre-schoolers need reassurance. When we think of going to hospital, we think about the role of health professionals and may not stop to think about the role of parents. My take home message for parents was that their role is really important too. Parents and carers help their children cope with fear by being calm. Playgroup parents laughed at this point, recognising this is something easier said than done. I showed them two books Help! My child is in hospital and Everybody stay calm.

Before my voice faded into the general hubbub, my final point was that it is important to be informed and not to be afraid to ask if something is not clear. Parents can ask the hospital what resources are available to help prepare. The AWCH website and Dr Angela MacKenzie have many helpful links for parents and carers who want to prepare their children in different medical situations. A special mention was given of the wonderful free app designed for and with young children, “Okee in medical imaging”.

A chat with staff at a local pre-school followed. It was not long after I had arrived when a teacher pointed out the hospital corner, put together because of a child’s recent hospital stay. The staff borrowed books to read to their classes and enquired about books for children with special health needs or those who have sick parents. 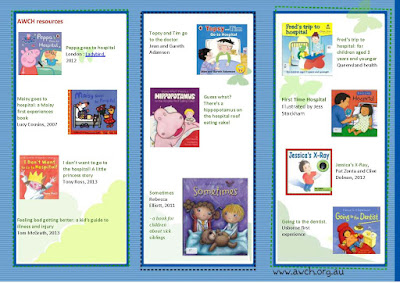 One of the most poignant reasons for preparing children for hospital came from a playgroup mum. She shared an experience as a three year old child. She recalled how her parents said she was going on holidays. It was devastating to find this was misheard and that instead, her parents had said she was going to hospital. This became a traumatic experience and hard to get over. I finished the morning with a greater certainty that preparation is time well spent*.

*Dr Angela MacKenzie encourages parents to do their “homework” and be prepared.